Winter in this part of Japan can be exceptionally beautiful. The water becomes calm on one side while the mountains and rolling hillsides turn color on the other. Winter adventures begin and we are in a fantastic place to participate in them. Skiing and snowboarding are in no short supply here in Yamaguchi and Hiroshima prefectures. With the added advantage of a well-stocked Outdoor Recreation center where equipment can be checked out for free, many people are heading into the hills to enjoy the winter. However, I feel it is my duty to warn people of a certain danger in doing so they may not be aware of. Of course, I am talking about the “Yuki Onna.”

The Yuki Ona (literally translated into “snow woman) is one of the more well-known yokai here in Japan. A yokai is a kind of otherworldly monster native to this country much in the same way other nations have elementals, fairies, zombies and so forth. Living in the mountains, the yuki onna is normally said to resemble a beautiful woman in a pristine white kimono. But do not be taken in by her appearance as it hides a truly dangerous creature that is similar to a version of a vampire.

If the yuki onna comes across a lone traveler on her mountain, she will turn into a predator either by luring the prey to her like a siren or going into a hunt mode. Once the poor, unsuspecting person is in the yuki onna’s clutches, she feeds on their life force draining them of their soul leaving behind a frozen shell of a human being. Before hitting the slopes, it is important to understand this threat to your safety and know what kind of defense is available against her. 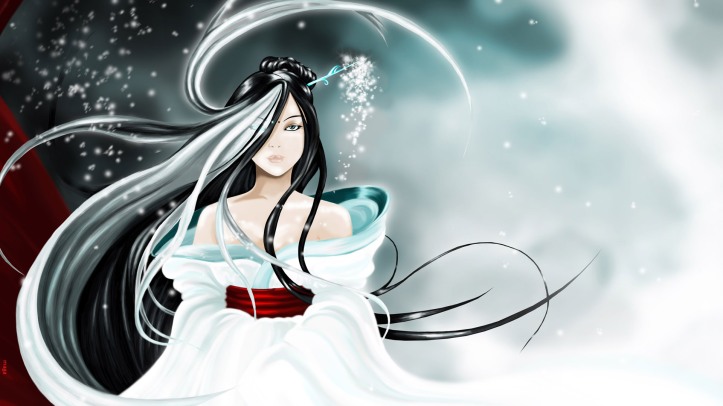 First, recognize the symptoms of a yuki onna victim. It begins with shivering to the point of lethargy. Exposed skin can become affected starting with painful frostbite and ending with numbness. Loss of feeling in the extremities is also common as well as eye pain or loss of vision. Sometimes even hallucinations can occur and the false feeling of warmth takes over. While these may sound like what happens with cold exposure, make no mistake; it is the work of the yuki onna.

The primary defense against this vicious yokai is to avoid going into unfamiliar mountain territory particularly when alone. She rarely ever attacks groups or people who know where they are going.   Also, one should wear plenty of layers and learn some basics of winter survival such as how to seek shelter and find help in case of emergencies. Yuki onna go straight for the core body temperature so keeping your center as warm as possible will help fend her off. And above all, stay hydrated and calm. The elderly and very young are at an increased risk of falling under her spell.

Knowledge is the best weapon against her and there are many good places to go for more of it. One pastime that is becoming popular around the US and Japan these days is survival/self-reliance training. Professional instructors take people into the woods, desert, mountains and other environments to show them how to do the basic skills that so many of us in the civilized world have forgotten. The ability to make fire, drinkable water, shelter, and continued faith in one’s ability to live in the elements can save lives in many situations. It is always important to understand how to protect yourself from dangers both natural and… other.

First aid and winter survival tips can be found from a variety of resources and schools such as community recreation centers as well as some of the YMCA facilities here in Japan. Also, stories about yokai can be found at libraries and a multitude of books that can be easily found online. I can recommend getting started by reading The Kwaidan by Lafcadio Hearn which is widely known as a top drawer collection of Japanese tales of the strange and bizarre that contains an excellent account of an encounter with a yuki onna. After all, the more you know the less you need. Stay safe out there!

Eric Drummond has lived in Kanagawa for three years before returning to the US.  While there, he became a professional mentalist and bizarre magician as well as a paranormal investigator.  He moved back to Japan in 2014 (Hiroshima) and picked his trade back up in a new way for a new world.  He is known in Japan as “the Brother Grimm” and works at exchanging dark stories/legends to build bridges among the cultures.  Mentalist, mage, and purveyor of fine pretranatual products and services,  he can be found most readily at East West Mentalist on Facebook.