Akashi Park is a large, sprawling park in the middle of Akashi, Japan. Akashi is a small city (by Japanese standards), located between Kobe and Himeji. The park is famous for being home to Akashi Castle as well for its numerous athletics facilities.

I worked in Akashi for more than four years and basically spent time every day in this park exploring the forest paths, fields and ponds. I’m going to share with you my own observations about the park and where I think some of the best spots are to see birds, insects and other fun things. As an educator and naturalist, during my last few years working there I took my exploration of the park more seriously.

Both birders and insect fans are in for a treat when they visit Akashi Park.

The easiest way to get to Akashi Park from Kobe is by taking the JR (Japan Railway) Special Rapid Train. From Sannomiya Station in Kobe it will take about 15 minutes to get to JR Akashi Station. Exit Akashi Station and you are a 5 minute walk from the main entrance to the park. You can also take the Hanshin/Sanyo line there, but it takes about 30 minutes. 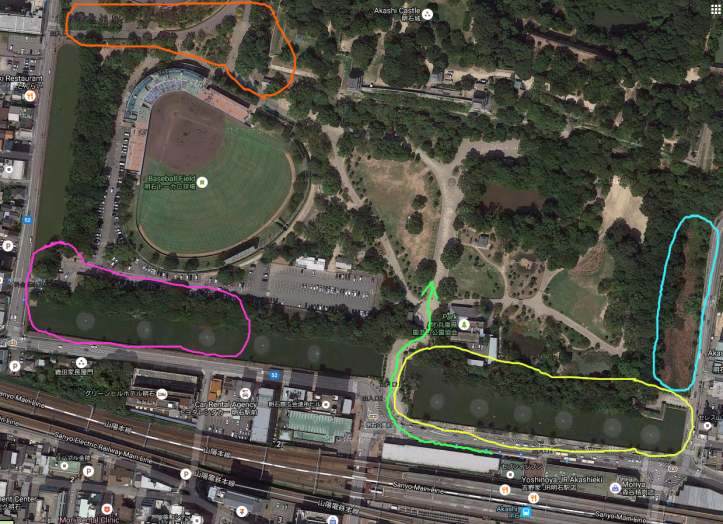 When you exit Akashi Station you walk past the Mr. Donut and 7-11 and cross the road. You are immediately facing Akashi Castle moat. On the above map I have highlighted a few areas of interest. The green line shows the path to the main entrance.

The area circled in yellow is home to a large number of turtles in the summer months. Most are Red-eared Sliders, but there are also some varieties of native Japanese turtles and if you’re lucky you might catch a glimpse of a Chinese Soft-shelled Snapping Turtle or a Rat Snake.

This same area often has numbers of Black Kites patrolling overhead throughout the year. Ducks such as Mallards, Eastern Spot-billed Ducks and in the winter, Common Pochards, Eurasian Wigeons and occasionally Little Grebes can be spotted.

In the area highlighted in pink you can see Little Egrets, Great Cormorants and Grey Herons perched in the tall trees throughout the year. On the far right side of the moat, during the winter months you can find a large number of Black-crowned Night Herons roosting.

On the far right, the area highlighted in light blue is a pond that is normally covered in thick pond weed and has lots of bullrushes or cattails which can obscure your view. From the sidewalk along this pond I have spotted numerous ducks as well as Common Moorhens.

In this area next to the park’s main office, which sometimes has nature photography exhibitions inside, are a few great little ponds. The area highlighted in yellow has a lot of beautiful water lillies which bloom brilliantly in the spring. Early in the spring you can find lots of tadpoles (really big ones) swimming close to shore. By late spring you can hear the bullfrogs croaking. The ponds are frequented by Mallards, Grey Herons and in the warmer months, Great Egrets. I’ve even spotted some pretty large rat snakes in this area.

The small man-made pond circled in pink is stocked with crayfish and you can often see children with their families there with small rods fishing for the mini lobster look-a-likes!

The pond with brown water behind this area often has herons in the trees and lots of turtles swimming around.

The main pond in the middle of the park is a waterfowl paradise. During the summer months you can rent pedal boats and bob around the pond. There are a large variety of birds there throughout the year, but Fall, Winter and Spring are the liveliest times.

The area circled in green has a major Grey Heron and Great Cormorant population roosting in the trees. There are literally dozens of them nesting there. They are quite used to people around and you can get remarkably close to take photos or simply admire with your optics.

The small island in the middle highlighted in blue is often covered with Grey Herons, Cormorants and other birds just handing around. 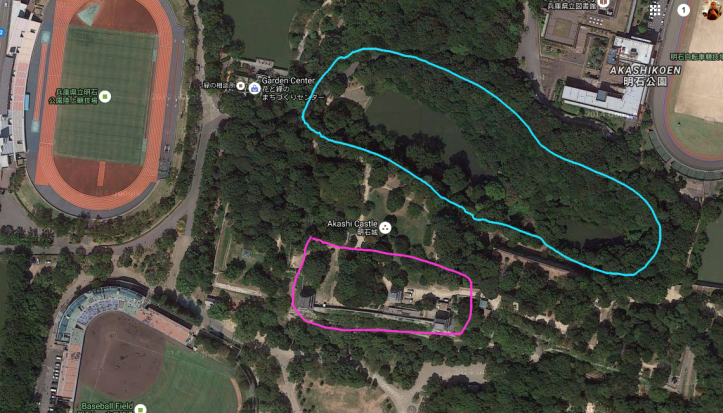 The area in pink includes the reconstructed castle turrets and from there you can take in a wonderful view of downtown Akashi.

The areas highlighted in blue are below and behind the castle area. There is an amazing wealth of life there. The heavily forested area is filled with Japanese Bush Warblers, Black-faced Buntings and other birds.

The ponds often have birders posted around them closely watching a wide variety of ducks. I once even spotted a Smew in the larger pond.

This area is also an amazing place to find large centipedes (keep a safe distance since they are venomous), massive orb weaver spiders and large hornets (watch out for the Giant Asian Hornets…they are big, mean and not to be messed with).

In the winter months, this whole area is filled with Japanese White-eyes. They are wonderful little birds that will be guaranteed to put a smile on your face.

Akashi Park is a must-see place in the Kansai area for those who are interested in taking in nature in an accessible way. The birds and insects are abundant and so is their variety. The best times for seeing birds are when migrants stop over throughout the cooler months of the year. This park is also a nice place to visit in the spring when the cherry blossoms are in bloom.

The park is also a great place to take photos, enjoy picnics or hanging out with family and friends.

You can see more photos of birds in Akashi park over at my Birds of Kansai Facebook page. I suggest LIKING the page so you can always see the latest photos of birds or other wildlife I see in this region of Japan.

Below are a few photos I’ve taken of birds in Akashi Park.