The second installment in the new nature series about Japan.

The Black Kite or “Tobi” トビ as it is known in Japanese is a common sight in the skies throughout Japan. This raptor is thought to be the world’s most abundant bird of prey. Its numbers are healthy and is under no threat.

This bird can be mainly found in Eurasia, Australasia, Oceania and is a year-round resident here in Japan. You can see this powerful looking bird often soaring in the thermals high above coastal areas, rivers and lakes. I’ve also seen them in farming areas throughout the Kansai region of Japan. They are very graceful flyers that soar with ease and turn with precision.

Male and female Black Kites look very similar and are very opportunistic hunters. They prey upon fish, rodents, and other birds. They are also known to scavenge which is one of the reasons they are so successful a species. I have watched them dive towards the ocean plucking fish from the water and I have also seen them dive-bomb people at highway rest stops trying to steal their rice balls and bento box lunches. 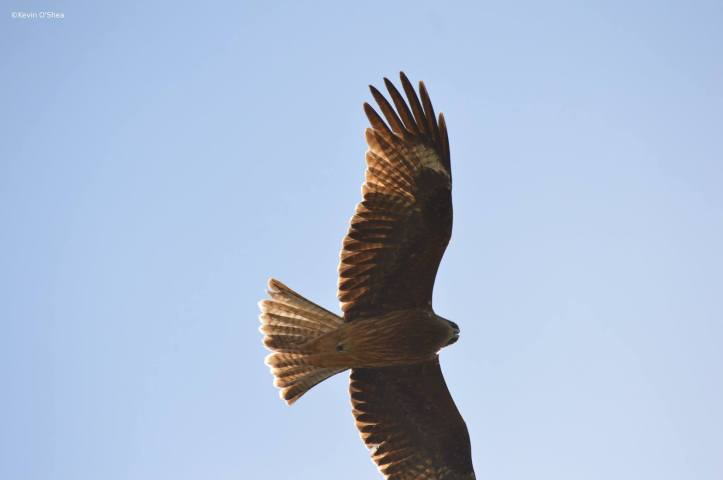 They are apparently attracted to smoke and fire where they search for escaping prey.

Kites are relatively uniform in appearance. Their upper plumage is brown but the head and neck tend to be paler. The patch behind the eye appears darker. Some people refer to them as Black-eared Kites because of that dark ear patch, but most simply call them Black Kites.

Being a large raptor, Black Kites virtually have no predators aside from one, the Eurasian Eagle-owl. This powerful owl can easily pick off even adult Black Kites and can sometimes be found in northern parts of Hokkaido (common throughout Europe and other parts of Asia).

Black Kites are definitely an abundant and very cool bird to see around Japan. Hope you have a chance to see them on your next outing or trip to Japan.

For more on Black Kites and birds in Japan check out the Birds of Kansai Facebook page.

Sources: BirdLife.org, Wikipedia and my own knowledge and observations.

Photos: All photos are by Kevin O’Shea (blog author) and more can be found here.