Surprising Things About Cycling in Japan

I’ve been cycle commuting in Japan for the past 3 years. Each day I hop on my bicycle here in Kobe, Japan and cycle roughly 20 kilometers. I’ve cycled in all kinds of weather and conditions. I’ve battled typhoons and other windstorms. I’ve fought my way through rainstorms and dark evenings. I’ve almost ben creamed by cars too many times to count. The only time I don’t ride my bicycle is if I’m injured, my bike is in need of repairs or I need to carry something large to work. In those rare cases, I take the train.

In the countless hours I’ve spent on my bike, there are many things I’ve come to notice and realize about cycling in Japan that may or may not surprise you.

Cycling on Sidewalks: Almost everyone cycles on pedestrian sidewalks in Japan. If you are from a European country or North America this will seem odd, but it is simply the way things are in Japan. It is rare for people to cycle on the streets with traffic. When you are walking down the street you may get startled from time to time as bicycles zoom past or more slowly ride around you. This is connected with the next surprising thing.

Lack of Road/cycling Infrastructure: It is rare for people to cycle on the streets with traffic. The only people who do it normally are serious cyclists on high-quality road bikes. Traffic moves fast and a standard Japanese mamachari simply cannot keep up with it. Also, there is a lack of street cycling infrastructure. Bike lanes are a unicorn here in Japan. I have seen them being put in in Kyoto in recent years, but again, very rare. 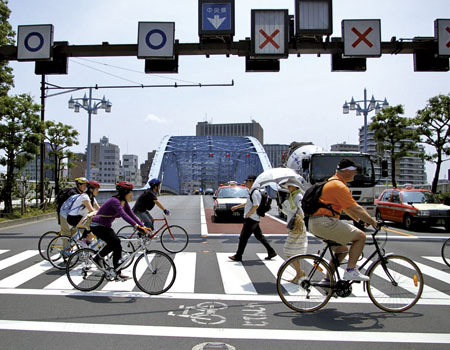 Ride on the left…NOT! In Japan people drive their cars on the left side of the road and when cycling you are to ride your bike on the left hand of the sidewalk or bike lane. It’s amazing how many people who were born here and have grown up here refuse to do that! It can get frustrating to encounter these people.

Texting and Riding: This is much more common than you may think. A lot of adults do this as they cycle to and from work. Riding their bike and staring at their smart phones. VERY DANGEROUS! I have been in many near accidents with people doing this. Adults do it sometimes, but even more dangerous are high school students (most often girls). It is very common to see them using one hand to hold the handlebars and the other to text! Be careful when you se them approaching.

Umbrellas and Bikes: Normally, on rainy days, instead of wearing rain jackets or rain gear, people in Japan prefer to hold umbrellas when they cycle. This of course means they are only using one hand to control their bicycles and often, their view and line of sight is obstructed. They may be too busy fumbling to hold the umbrella to see you or the umbrella simply angles over their face so they don’t see you. Be cautions when cyclists holding umbrellas approach. 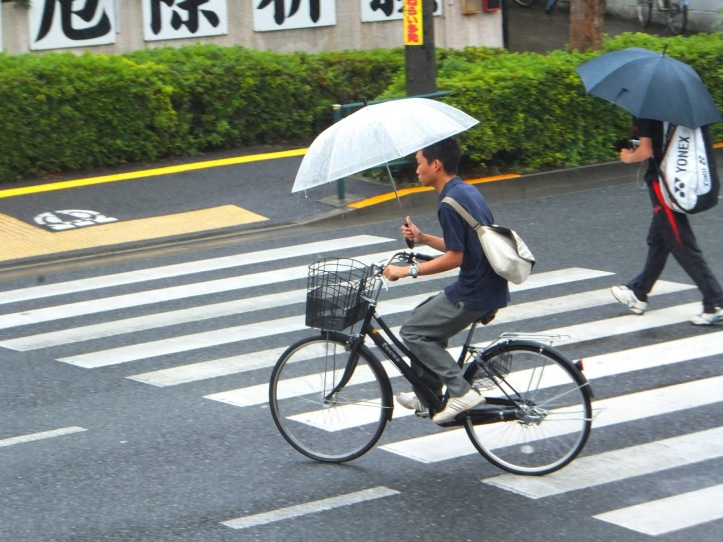 Looking at the ground: It is surprising to see the number of people who stare at the ground or their own feet while walking. They do not see you. They can often wander from one side of the sidewalk to the other while walking. Be careful. Most are using earphones too so they can neither see or hear you!

Helmet laws: As far as I know there are no mandatory helmet laws in Japan. It is very common to see children wearing bicycle helmets, but the only adults who wear them are serious cyclists. I’ve never seen or heard or police stopping people for not wearing helmets.

Earphones or ear buds: Police will stop you if they see you wearing anything that could obstruct your sense of hearing. I have been guilty in the past of wearing ear buds and listening to podcasts while cycling and I have been stopped a few times by police and told NOT to do it.

Registering your bicycle with police department: When you buy a bicycle at a bike shop you will be asked (told) to register it with the city police. It costs ￥500 here in Kobe, Japan. You get a special registration sticker that helps police track your bike if it is stolen. If you buy your bike online, you’ll have to bring it to your local police station to register it. I have been randomly stopped by police before to see if the bike I was riding was indeed my own. They checked my bike’s registration number and my ID and called it in.

Bicycle theft: Believe it or not, it is pretty common in Japan.

Affordability: Bicycles in Japan are very affordable (not high-end bikes) and getting them repaired is quite cheap. I like that!

I hope you took something away from today’s post. If you plan to come to Japan to live, work or travel, I recommend hopping on a bike and experiencing japan at a slower pace. It’s also a great way to explore the back streets and roads less traveled in Japan.